Suriname was a former Dutch colony that became independent in 1975. The country is situated on the Northeast coast of South America, with Guyana to the West, French Guiana to the East and Brazil to the South border the Republic of Suriname.

Suriname is one of the least populated tropical countries in the world with approximately 95 percent of its 500.000 inhabitants living in the capital city Paramaribo and in small villages located along the coast and riverbanks.

Suriname is ideally suited for the conservation of its unique neo tropical Rainforest biome. While Suriname is a relatively small country, internationally it is quite significant, because it has one of the highest percentages of tropical coverage in the world. Over 85 percent of the country is covered by pristine Amazon rainforest with under a 0.1 rate of destruction annually.

The country has a forest nine times the size of Costa Rica forest and more tropical forest than all but four African countries.

Suriname has a vibrant animal and plant life in the largely uninhabited and undisturbed rainforest and it is has 13 natural reserves and one Nature Park. The countries wildlife includes at least 700 species of birds, 200 mammal species, 130 reptiles species, 99 amphibian species and countless botanical species, of which the majority has never been botanically surveyed.

With almost 3.000 miles of waterways, Suriname is also known for being a land of winding and turbulent rivers. Less known, but just as intriguing, are the rich savannahs, coastal plains and Swamplands. Suriname is also one of the few countries where the endangered Sea Turtles nest every year from February through August.

Each year thousands of baby sea turtles are born on the coastline of Suriname.

The official language is Dutch, but English is widely spoken along the coast. The local language in Suriname is “Sranan-Tongo”, a language composed of English, Dutch, French, Portuguese and African roots. In the interior the many different ethnic groups and tribes continue to speak their own language as well.

Suriname is a sunshine country with an average daytime temperature of 28 degrees. This is also the case in the interior, where the temperature drops to about 20 degrees at night. The tropical rainy season (the Green Season) is from mid-April to mid-July and a brief one lasts December-January. The two dry seasons are from mid-July to November and February to mid- April.

A few hotels and companies accept credit cards such as ‘Visa’ and ‘Master’. Payments by traveler’s cheques and credit cards are charged with administration costs and are not generally accepted. It is advised to travel with cash in US-dollars or Euro.

Transport in the capital is by bus or taxi.

Note: taxis are not marked and have no taximeter. The hotels will be happy to arrange a taxi, though visitors are advised to ask for prices prior to departure.

Transport to and in the interior

Some places are very remote and can only to be reached by small aircraft. The primary mode of transportation in the interior is by dugout canoe (korjaal) or by foot. Excursions by dugout canoe are motorized.

It is safe to use tap water in the city. In the interior, the use of bottled water is advised.

Tourists can purchase several types of visas for Suriname. The most useful visa for our guests is the tourist visa card.

This can be purchased at the following locations:

Note: The tourist visa card is only applicable for tourism purposes.

Citizens or nationals of the following countries can purchase a tourist visa card are:

For further information, please contact the local embassy or fill in the form for a visa on the embassy’s website. 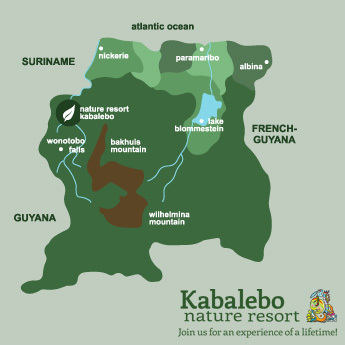